Academic papers engaged, but were not limited to, the following indicative topics and themes. The papers, performances, and presentations addressed them from a variety of perspectives, including: visual-art practice; visual-art history, theory, and aesthetics; sound-art practice; sound-art history, theory, and aesthetics; music; performance, TV, theatre, and film studies; pedagogical studies; cognitive science, psychology, and medicine; archivism and museum and gallery studies; and technology:

°       ekphrastic responses to and by visual, sound, and text-based arts

°       sound and ‘the dematerialization of the art object’

°       the installation, presentation, and performance of intermedial art works

°       the visual dimension of musical performance

°       the visuality of musical instruments

°       image and sound/deafness and blindness

°       the motivations and obstacles to, and the psychology of, intermedial and bi- and tri-medial practices

°       the relationship between visual and auditory perception.

°       sound in performance art and other ‘established’ forms

°       integrations of visual and sound-based practices prior to modernism

°       revisiting the ‘sister arts’ in the twenty-first century

°       the industrial and digital revolutions

°       the relationship between contemporary sound-art practices and other forms of audio-visual fusion,
such as cinema, television and video, theatre, music theatre, and opera 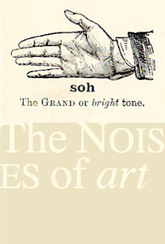